Who Is Chrissy Cunningham In Stranger Things 4, Know About Her Biography 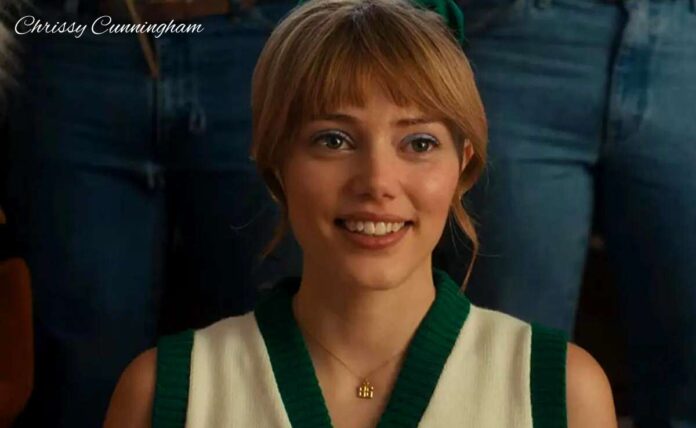 Stranger Things is a popular series present on Netflix. Its 1st season was aired in 2016. It is a horror, fiction, and thriller drama in which supernatural forces can be seen.

A young group of friends in the state of Indiana witnesses supernatural forces. A character of a young girl named Chrissy Cunningham, who was suffering from an eating disorder, Bulimia.

She has become a victim of the supernatural wrath and died. Grace Van Dien, who is an American actress, played the character of Chrissy Cunningham.

Chrissy was the elder child of her parents named  Phillip Cunningham and Laura Cunningham. She had a younger brother as well, the name of whom was not known.

In 1979, Chrissy Cunningham started to attend a high school for her schooling named The Hawkins High School which was in Hawkins, Indiana. She is a bright student along with an interest in cheerleading.

At her high school, for the first time, she participated in the school’s talent show in which she performed the routine cheerleading. And at the show, she met Eddie Munson. She finds him as a person full of attitude.

Eddie has also participated in the talent show, where he played his guitar along with his band named corroded coffin. Both of them, Eddie and Chrissy were impressed by each other’s performances but they did not talk with each other.

After Chrissy’s performance, she became the Queen of Hawkins High and the head cheerleader of the Hawkins High Cheerleading squad. She is also the girlfriend of the school’s basketball team’s star player, Jason Carver.

Along with all this popularity, love, and success, Chrissy started to suffer from an eating disability known as Bulimia, which was the result of Chrissy’s mother’s mental and emotional abuse on Chrissy and also because of the pressure of the Hawkins cheerleading team of Hawkins.

When Chrissy entered her senior year in school, she started to consult the school’s counselor, Ms. Kelley.

The Incidence Of Chrissy’s Death In The Year 1986

After the prep rally on March 21, 1986, Chrissy completed her session with Ms. Kelley and was leaving her office when Max Mayfield noticed her. Chrissy started to spew in the bathroom. Inside the washroom, she starts to imagine her mother mimicking her and making fun of her. As soon as the voice lightened up, she fled from the room.

Chrissy left towards the woods after school to get narcotics from Eddie Munson. She turned around and left strangely after being startled by the sound of a clock striking on the tree trunk that belonged to her grandfather.

She became very frightened and ready to leave the place but suddenly Eddie came forward and apologized for scaring her. She turned around in search of the clock but it disappeared.

Then Eddie And Chrissy Discussed The Marijuana Sale

That night, Max saw both of them together in Eddie’s trailer. Eddie said that he is just coming by to take the drug Chrissy ordered and asked her to stay where she was. Chrissy again saw that clock and she got frightened.

She starts to find Eddie running in the trailer but suddenly she feels that she is no longer in a small trailer instead she is in a bigger house. She saw her mother there but she turned around and saw a demonic face of her.

When Eddie comes back he found Chrissy at the same place he left her but she was unresponsive. Eddie tried to wake her up but she was in a catatonic state, the lights of the trailer started to flicker.

Dazing Chrissy heard a voice calling her, then she saw a tall creature of flesh coming towards her and saying to her that her sufferings are going to end now.

In Eddie’s trailer, Chrissy’s catatolic body began to levitate and then slammed to the ceiling her limbs began to twist, violently. Then everything just burst up and dropped on the floor. Seeing all this Eddie fled in terror.

Eddie has emerged as the prime suspect in her murder after authorities discovered the body in his trailer. Max and others will conclude that Venca was responsible for this crime.

Phillip Cunningham’s character was of a silent man, like the one who does not speak in front of her wife. He just listens to her wife’s orders and moves in the way she told him to go. He is also blindfolded over Laura’s abuse of Chrissy.

Laura Cunningham was the active lady of the house. She governs the whole house with her dominant nature. She is even abusive with her daughter, Chrissy, and almost every time she used to abuse her mentally and emotionally.

Due to the abusive behavior of her mother, Chrissy almost every time remains very upset and she has always been drowned in an ocean of tension she has also been diagnosed with an eating disorder, named Bulimia.

His relationship with Chrissy was healthy in the starting days but they still like each other. Chrissy was an intact personality, she had never told Jason about her personal life struggles. After Chrissy’s death, Jason was very much upset and he wants to take her murder revenge.

The only person who witnessed Chrissy’s death. He was fragmented in grief and guilt after her death. He considered himself guilty of not helping her.

The first time when he met Chrissy they didn’t have any conversation but at the drug dealing spot, they exchanged good words and feelings of respect.

World Is On The Verge Of A “Global Recession,” WTO Leader Warns

The president of the World Trade Organisation (WTO) has...
Read more
Biography

What truly is it like to be found with...
Read more

Notarize is a distant, computerized notary service that permits...

With a launch spot reserved on SpaceX's Falcon 9,...
amit@zestfulloutreach.com